Where to see the biggest gatherings of bear fishing

SHARE:
The South Kamchatka Sanctuary is a kingdom of wilderness. Brown bears gather here every year to take advantage of the continent's largest spawning ground for sockeye salmon.

The South Kamchatka Sanctuary is a UNESCO World Cultural and Natural Heritage Site. Tourists flock to the area to explore the volcanoes and lakes, and of course, to observe brown bears in their natural habitat.

The most interesting sites at the South Kamchatka Sanctuary

Kurile Lake is one of the most remarkable spots in the Sanctuary. Located on wild rocky shores and bordered by impenetrable shrubs, the lake measures 12.5 km by 8 km. This is the deepest lake in Kamchatka, with a depth of 316 m.

The lake is surrounded by a number of both dormant and active volcanoes. The most picturesque of these volcanoes is the Ilyinskaya Sopka (1,577 m high). A stunning bay formed at its base, the result of lava flow following an eruption, which reflects the volcano in its glassy waters.

The lake is dotted with small lava islands up to 300 m tall, the most famous being the Heart of Alaid. There is a volcano of the same name on Atlasov Island in the Sea of Okhotsk. According to local legend, this Alaid Volcano left its heart on Kurile Lake.

The lake is the largest spawning ground for Pacific sockeye salmon in Eurasia. From July to September, hundreds of thousands of fish come to the Kurile Lake along the Ozernaya River. There have been over a million of these fish over the past several years. In August and September, brown bears come to the shores of Kurile Lake in search of food.

The most massive gathering of bear fishing takes place here. Several dozen animals congregate on the lake as well.

Visitors can watch the bears from a special observation tower nearby. Bears pay little attention to tourists and are more interested in fishing, raising their babies, fighting, and just relaxing.

Up to 3 thousand slaty-backed gulls also call the lake their home and nest in the nearby shrubs. When bears enter their period of hibernation, birds of prey converge on the lake for winter. Among these wintering birds are Steller's sea eagles, which are the largest birds of prey in Russia. 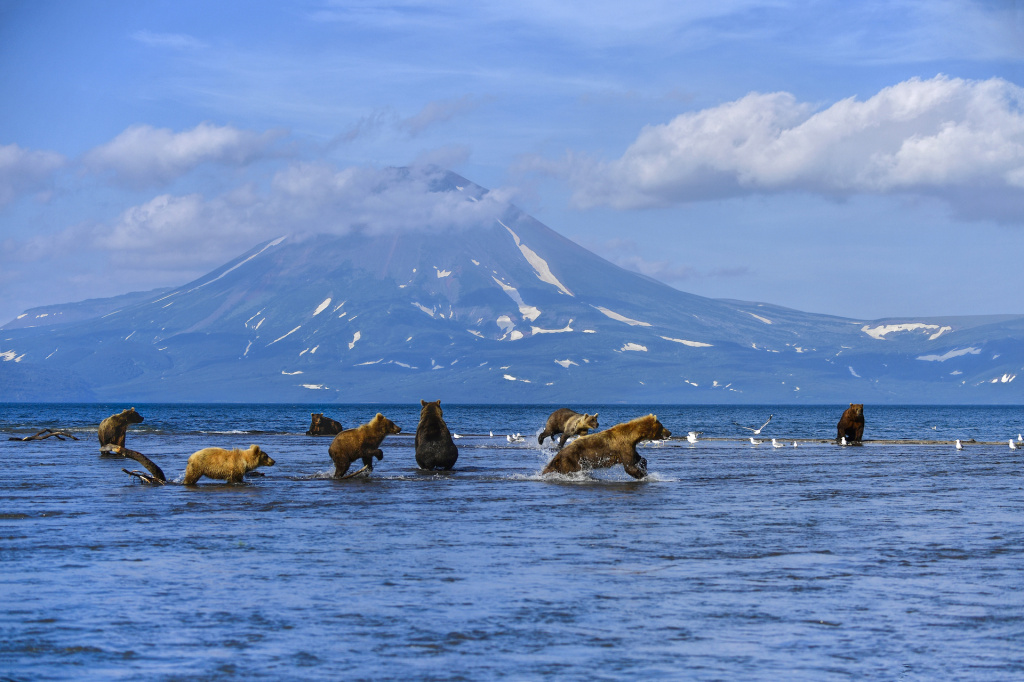 Located only four kilometres from Kurile Lake, the Kutkhiny Baty is a unique natural phenomenon featuring a whimsical outcrop of snow-white pumice stones. Bat means boat in Old Slavonic and Kutkh was a mythical raven god, revered by the Koryak and Itelmen people. The indigenous peoples of Kamchatka believed that Kutkh was the progenitor of mankind. According to their stories, the sun, moon, and stars had long been suppressed by a woman-spirit. It is thanks to Kutkh's wit that the world became illuminated once again.

The locals say that the wise raven god left boats in the area to dry, but then later forgot about them. These boats still wait for their master, ready to set off at first call. 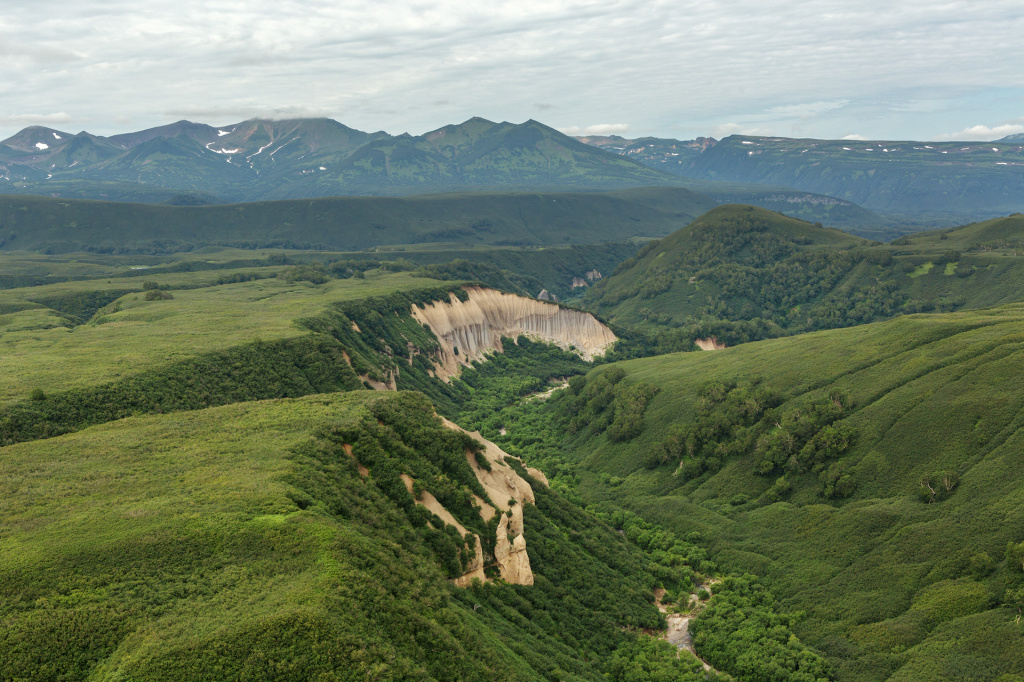 There are several thermal fields and springs scattered throughout the South Kamchatka Sanctuary.

The Verkhnekoshelevskoye thermal field is located in the crater of the Valentin Volcano at an altitude of 1,250–1,400 m above sea level. Locals have given it the unofficial name "Gremuchiye Klyuchi" (The Rattling Keys) and rightly so. The area is just over 3 square kilometres but contains over 40 stream jets which burst to the surface. Some of them erupt through the stream, making fountains up to 3 m high. This creates a truly magical view of warm streams, mud pots, and eddies of boiling water.

The Nizhnekoshelevskoye thermal field is located along the slope of the West Koshelevsky Volcano caldera, reaching an altitude of 750-800 m. This 100-450 m natural landmark is replete with simmering boilers, mud eddies, warm little lakes, and steam jets.

At the foot of the Ilyinskaya Sopka, in the area of the Tyoplaya Bay, the Kuril hot springs bubble to the surface among blocks of lava. The water temperature can reach +45˚С. 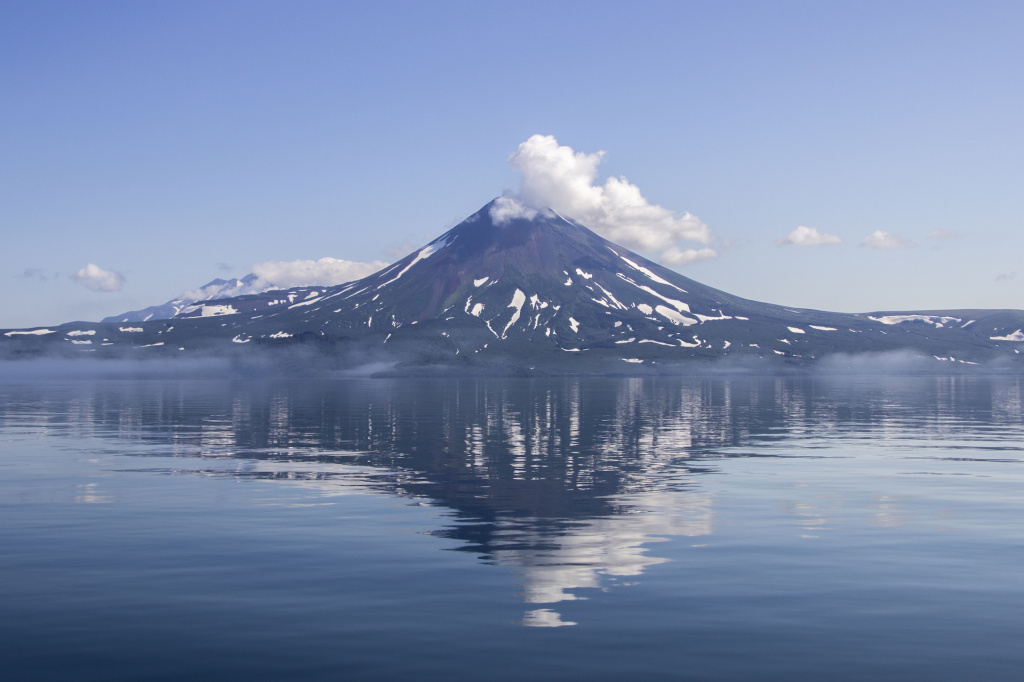 The southern border of the Sanctuary runs along Cape Lopatka. This is the southernmost tip of the peninsula, where the Pacific Ocean meets the Sea of Okhotsk. The peninsula is 25 km long and between 2 and 7 km wide.

The weather is harsh here, often covered in a chilly mist and subject to stormy winds. A lighthouse in the form of a 29-metre cast-iron light tower stands on the cape.

Tourists are drawn to the region for its pristine nature and rich fauna. Thousands of sea otters live near the low coasts of the Lopatka Peninsula, often sheltering on the shore during storms.

Many birds cross the cape during their migration period. In the autumn daylight hours, 9 thousand to 110 thousand birds fly over the area. Most flocks run along the west and east coasts.

There are many gulls, tufted puffins, and cormorants on the coast, which also serves as a breeding ground for fur seals, eared seals, and sea lions. The peninsula is inhabited by foxes, brown bears, ermines, wolverines, and other animals. 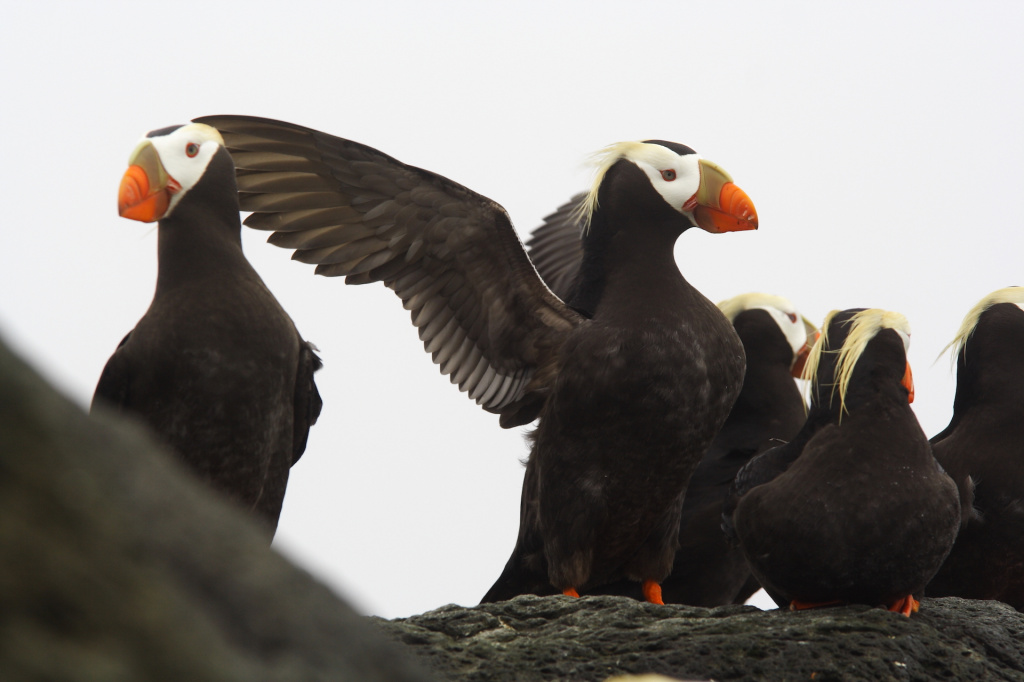 The island has attracted several hundred sea otters who call the region their home. There is a rookery of spotted seals. The island has large breeding grounds, including several thousand pairs of slaty-backed gulls and tufted puffins. From spring to December, grey whales are visible in Utashud's offshore areas. 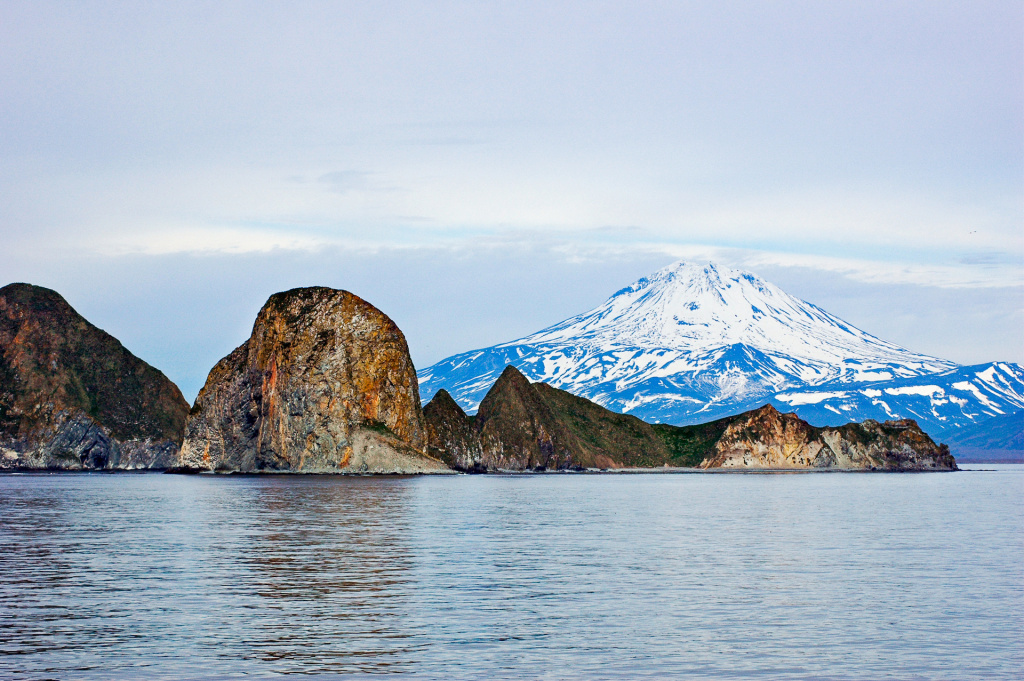 How to get to the South Kamchatka Sanctuary

There are no roads to the Sanctuary, so you can only get there by helicopter from the Yelizovsky district. Given the uncertainty of weather conditions, flights can be rescheduled or postponed indefinitely. Have a cushion time of at least 3-4 days when planning a trip.

You can extend your trip to Kurile Lake and take part in various sightseeing tours. For example, visitors can embark on a one-day walking tour to the pumice deposits of Kutkhiny Baty or climb the Domashnyaya Sopka. Tours to the Sanctuary are arranged by local tour operators. For route details and accomodation options, please see the official website of the South Kamchatka Sanctuary http://www.kronoki.ru/, or call +7 (41531) 7-39-05, +7 (41531) 7-16- 52, or email to zapoved@kronoki.ru.