One-day tour around the city

You nod off peacefully aboard the plane carrying you to your dream – the Kamchatka Peninsula. You wake up to the pilot's voice and through the window you see mountains jutting out of an ocean of mist, and the ocean of water, its blue surface seems to have no limits. The excitement fills you and you forget your tiredness. Next, you find yourself near your hotel in the centre of the city. It is time to meet Petropavlovsk-Kamchatsky for the first time and to plan your city tour which will be far from ordinary.

The airport is a 40-minute drive from the city centre, and on your way you will see the main landmark of the region – five "domestic" volcanoes, or so the locals lovingly refer to the mountains vigilantly guarding their city: the active Koryaksky and Avachinsky volcanoes, and extinct Kozelsky, Arik and Aag. Learn more about the volcanoes of Kamchatka here.

At the entrance to the city, travellers are met by a welcome monument with the models of St. Apostle Peter and St. Apostle Paul packet boats. It was on such vessels that Vitus Bering and Aleksei Chirikov arrived here during the Second Kamchatka expedition of 1740. Bering referred to the new settlement as Petropavlovsk Harbour. The date the packet boats made it to land – 17 October – is considered the foundation of the city. Learn more about the history of Kamchatka here.

The Peninsula offers a wide range of very comfortable lodging (learn more), from first-class hotels to cozy and healthy-lifestyle cottages. We wanted the starting point of our tours to suit all travellers, so we chose a local bus station. It takes only 17 minutes by taxi from the station to our first destination. 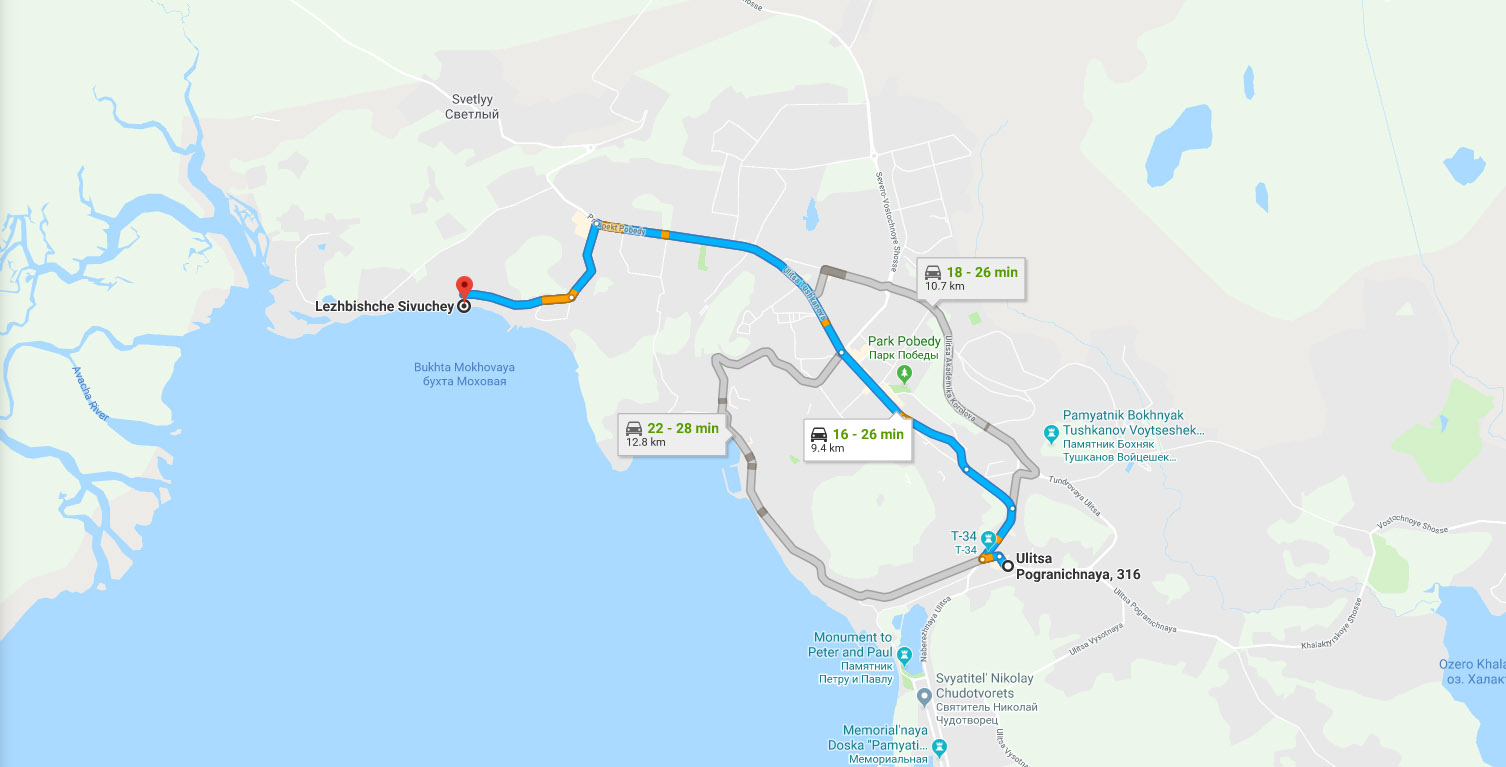 Our tour starts near the ocean. Why? Because Petropavlovsk-Kamchatsky is not a usual city. It stretches for 15 kilometres along the seaside and seamlessly combines natural and urban sceneries. No other place offers you a view of a rookery of sea lions (or Eumetopias jubatus, if you prefer a more scientific name; they are in the Red List as an endangered species of the second category of rarity) next to an old pier.

On our way to meet these habitants of the sea, we will see the magnificent Cathedral of the Holy Life-Giving Trinity (19 Vladivostokskaya ul.).

Sea lions are amazing animals that can live alongside human settlements, sometimes it seems that they enjoy showing off in front of camera. Anyway, we as polite guests maintain a decent distance while watching the animals and talking with the ocean. For those looking for more dynamic urban embankments buzzing with tourists and their children too excited after a visit to an amusement park, we suggest a walk starting at the heart of the city, the Avacha Bay. 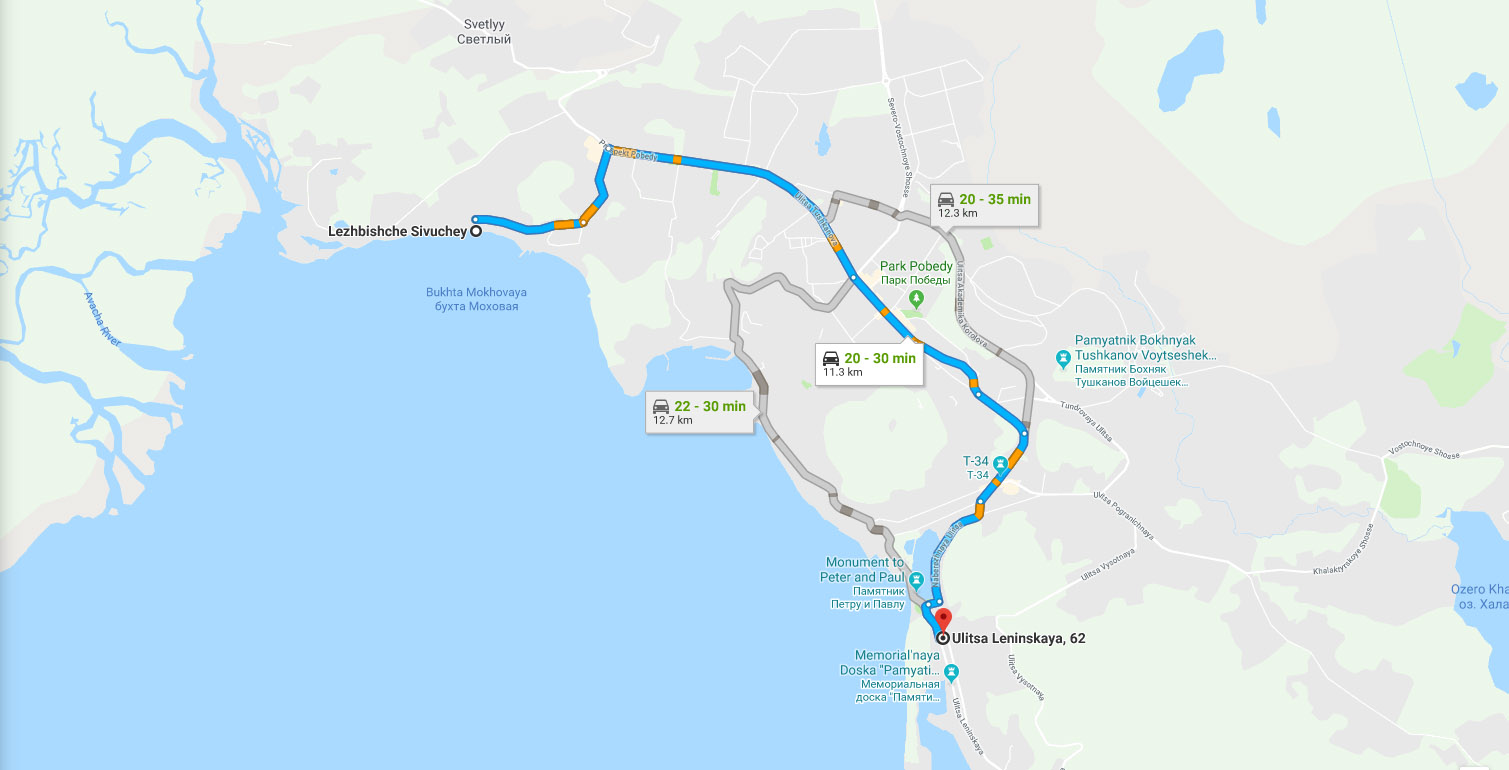 With your camera memory full of pictures of the ocean and sea lions, you can now enjoy your lunch. Hurry up to the centre of the city, where Kamchatka Manufacturers Exhibition Fair is being held. Here, local specialities by fishermen and farmers are on display.

The main gastronomical brand in Kamchatka is called "five-minute caviar". To make it, a chef takes the caviar from a fresh fish, removes the membrane with a wide-meshed net and then puts the caviar into a salty solution for no more than five minutes. And that's it!

You will be mesmerised by the enormous amount of salmon, caviar, giant crabs, and other seafood. Don't hesitate to order "five-minute caviar", white bread and sea urchin caviar. This guide will help you to navigate in Kamchatka's rich kingdom of seafood.

If you have enough time, take a walk from the fair to the memorials to the great sailors Bering and La Perouse (35 Sovetskaya ul.).

Next, with freshly-bought edible treasures in hand, steer to the embankment – turn right on Leninskaya ul., and pass the Monument to St. Nicholas the Miracleworker and the Theatre of Drama and Comedy. There, you will find a bank to sit on while eating the caviar and gazing at the ocean. 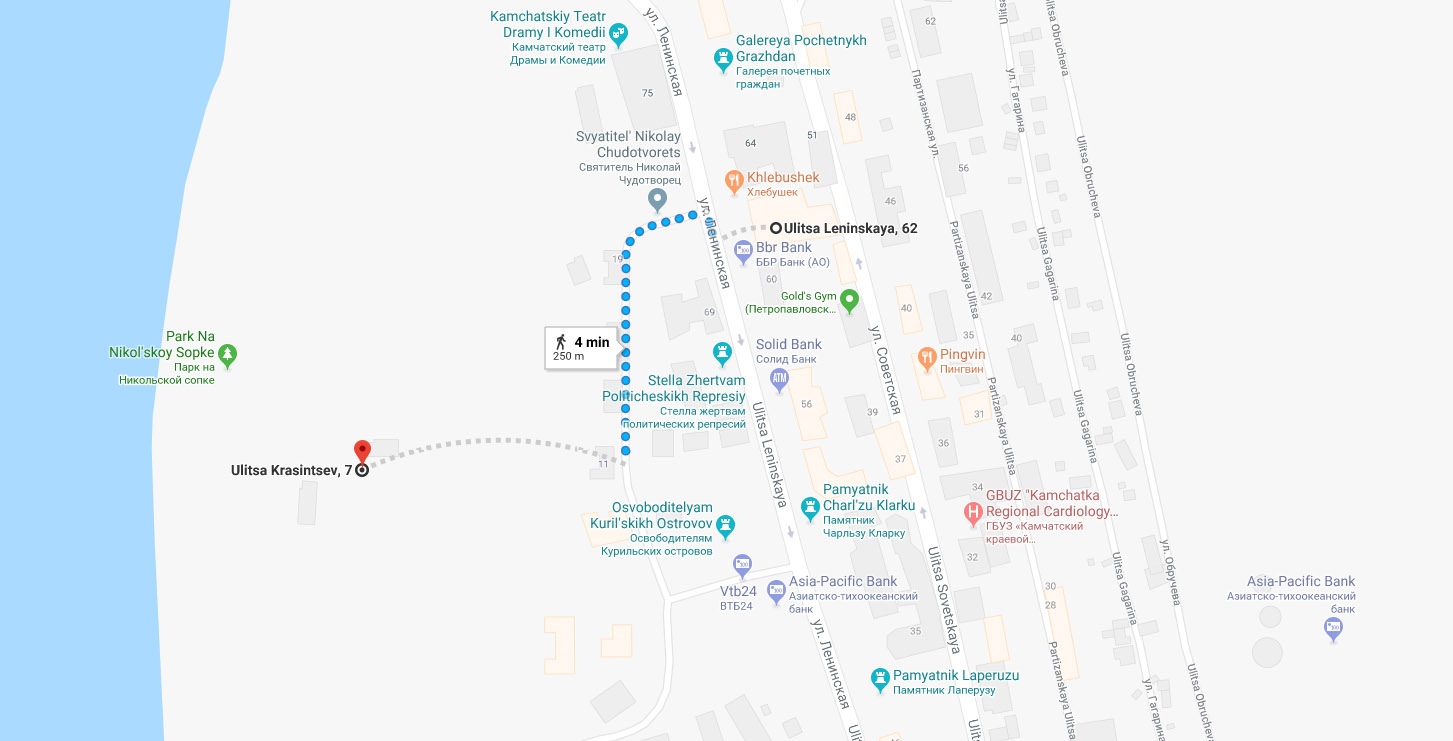 Such a royal lunch on the seaside will give you enough energy to continue your walk. Let this feeling accompany you in the adventures for your spirit when you visit Nikolskaya Sopka, also known by its romantic name as a Hill of Love. Today, it accommodates a culture and leisure park, but in 1854, it was a battlefield.

The rocky hillsides of Nikolskaya Sopka stretch along the narrow and stony coastline leading you towards the stairs to Signalny Cape.

During the Crimean War, Petropavlovsk-Kamchatsky was attacked by the united forces of the British and French fleet. Though significantly outnumbered, the defenders of the city managed to protect their home. The Glory monument, a five-sided obelisk with a gilded cupola, serves as a reminder of this victory of the Russian soldiers. A pedestal with a cannon was set in place there honoring the 100-year anniversary of the victory. A narrow concrete path leads from the monument to the bay and legendary isthmus, where the heroic "Deadly" battery No. 3 of Lieutenant Maksutov is sitting on the edge of the cliff just like a century and a half ago. Five cannons guard the marine access to the city. It seems that while on the hill, one can still hear an echo of the cannons and see officers looking intently to the sea through the gun-smoke towards the horizon. 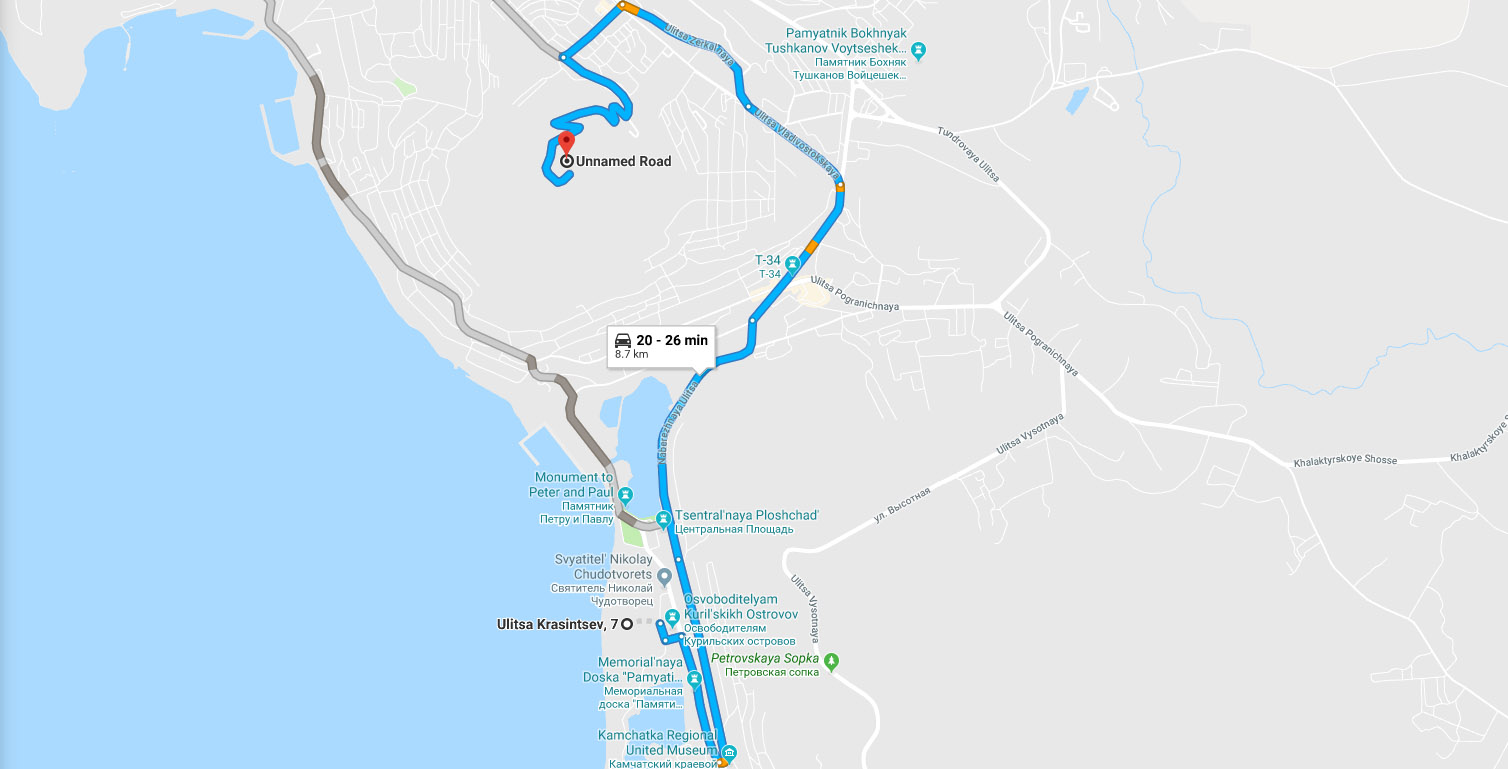 The first day on the peninsula calls for a spectacular conclusion. That is why we suggest climbing to the highest point in the city, Mishennaya Sopka, and enjoying a marvelous sunset. Here the beauty of Petropavlovsk can be appreciated at its finest – the blue bay and the dark ocean, velvet rocks and scattered houses that resemble small islands of sea-foam left on land between the bay and volcanoes by the passing waves.

At the top of Mishennaya Sopka, there are several gazebos and an observation deck.

How time flies! The day is almost over, but we still need to learn how the peninsula was discovered, what the local ethnic cultures are and what the distinctive features of each of the volcanoes are... Tomorrow you will have a chance to continue your journey in the interactive museums of the city – here you can find more details. 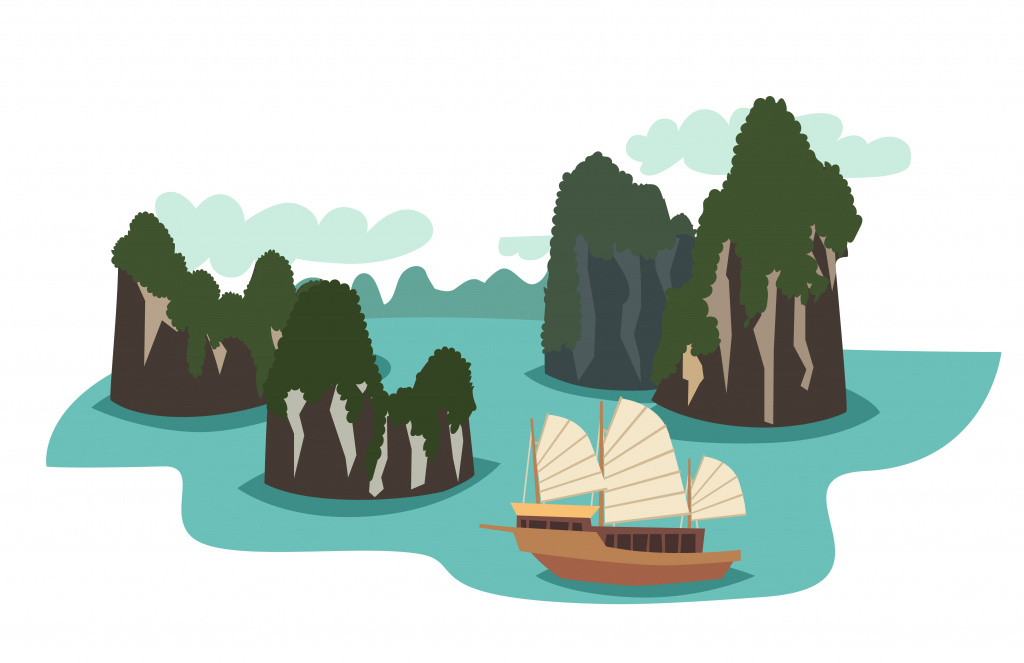 The city is also home to several picturesque bays within Avacha Bay: Mokhovaya, Seroglazka, Rakovaya, Zavoyko and others. Avacha Bay is quite beautiful thanks to its surrounding rocks and hills. From the west, two picturesque fishing rivers flow into it: the Avacha and the Paratunka. When heading from Avacha Bay into the open space of Avachinsky Gulf, there are three oddly-shaped massive rocks known as the Three Brothers poking out of the water. As legend has it, these were once three brother heroes that defended local residents from a tidal wave. After guiding the tsunami away from the shore, they turned to stone and remained there forever to protect the bay.

Sea trips to the Brothers have long been popular entertainment for both residents and guests of Petropavlovsk-Kamchatsky. They are offered by several local tourist companies. Travel across the bay or beyond can vary from 4 to 8 hours. During a mini cruise, you will pass Nikolskaya Sopka, Tikhaya bay, Babushkin Kamen Island and Cape Stanitsky.

Avacha Bay, on the bank of which sits Petropavlovsk-Kamchatsky, is the second largest bay in the world.

Avacha Bay does not freeze in winter and therefore serves as the main sea access to the Kamchatka Territory. It is home to the commercial port of Petropavlovsk-Kamchatsky and the ships of the Pacific Fleet of Russia are based here. The military and civilian vessels are tiny against the sheer size of the bay: according to some calculations, it is capable of accommodating the entire (!) world merchant fleet.

Where is this street, where is that house

Located on the eastern shore of Avacha Bay, Petropavlovsk stretches along the coast for 15 km. In fact, there is just one road passing through the whole city. Pobedy Avenue transitions into Tushkanov Street, then to 50 years of October Avenue, which continues into Zerkalnaya, Vladivostokskaya, Leningradskaya and Leninskaya streets. Further from the city centre, the same road continues, with the names of the streets changing from Krasnaya Sopka to Okeanskaya, and from Petropavlovskoe Highway to Industrialnaya. Certain sections of the districts of the city are traditionally referred to by the locals according to the ordinal number of the kilometre. Seven of these "kilometres" are in the city – from the 4th to the 10th.