The cosmic Kamchatka: the Valley of Geysers, Death Valley and steaming land

ПОДЕЛИТЬСЯ:
Snow-capped volcanoes, crystal waters of lakes, hot thermal springs and cosmic fumarole fields— the Kronotsky Nature Reserve has got it all.

It is one of the oldest nature reserves in Russia, with an area of over one million hectares, including 135,000 hectares of the Pacific Ocean. There are volcanoes on its territory, the highest of which is the Kronotskaya Sopka. Winters are cold and snowy, and summers are cool.

Near Cape Kozlov, you can find a sea lion rookery. Every year, more than 100 seals are born here.

Many animals have found refuge and protection from complete extermination at the Reserve.

Below are the most interesting sites of the Kronotsky Nature Reserve

The Valley of Geysers

The Valley of Geysers is one of the most picturesque places on the Reserve. It is a canyon up to 4 km wide, up to 400 m deep, and about 8 km long, along which the Geysernaya River flows.

There are more than 40 geysers and many hot springs in the Valley. Here one can observe all known forms of hydrothermal activity: springs boiling with steam, mud volcanoes, hot lakes, fumaroles. All of them sit side by side on a very small area ¬— such a density of sites you won't find even in Iceland or New Zealand.

Steam constantly swirls in the Valley, the smell of sulfur is always in the air, and geysers explode with sparkling drops. However, each at different intervals: some erupt every 10 or 20 minutes, while others need several hours for a new eruption. Large geysers have got their own names, like Nepostoyannyi (Inconstant), Kipyashchiy (Boiling), etc. Most of the hot springs are located on the left bank of the Geysernaya River.

By the way, fields of hot springs and hot lakes are a favourite resting place for brown bears.

Visitors to the Valley can only walk along the trails. It is forbidden to leave them and the observation deck: the danger of getting into burning water or mud is too great. 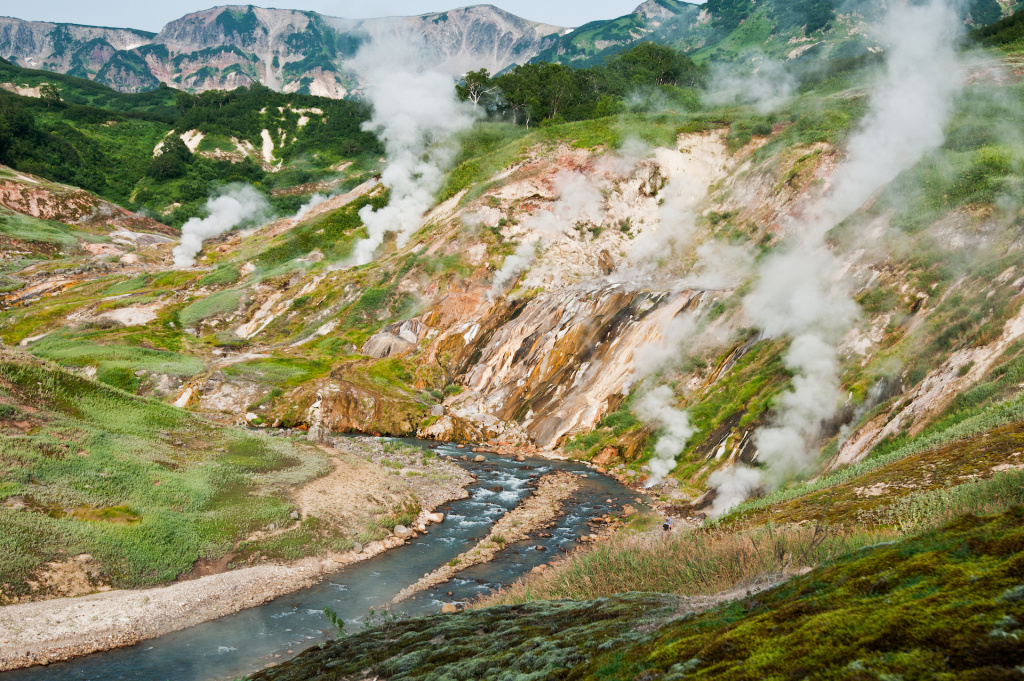 Caldera of the Uzon Volcano

Another unique natural object—the caldera of Uzon Volcano¬¬—is located 17 km from the Valley of Geysers. This bowl-shaped basin measuring 9 by 12 km was formed 40,000 years ago.

The hydrothermal system of Uzon is one of the most powerful in Kamchatka. Fields of hot springs encompass over a thousand thermal springs, many steam gas jet exits, thermal lakes, mud pots and little volcanoes. Caldera is striking in its colour diversity: it has got puddles with boiling clay of various colours, and the Bannoe, Chloridnoye and Utinoye Lakes with milky white water.

One can observe the manifestations of young volcanism, glaciation products, fields with sulfur deposits, oil springs. 65 different minerals were found here, including the unique uzonite.

The indigenous inhabitants of Kamchatka called Uzon “steaming land”, and endowed it with mystical properties. 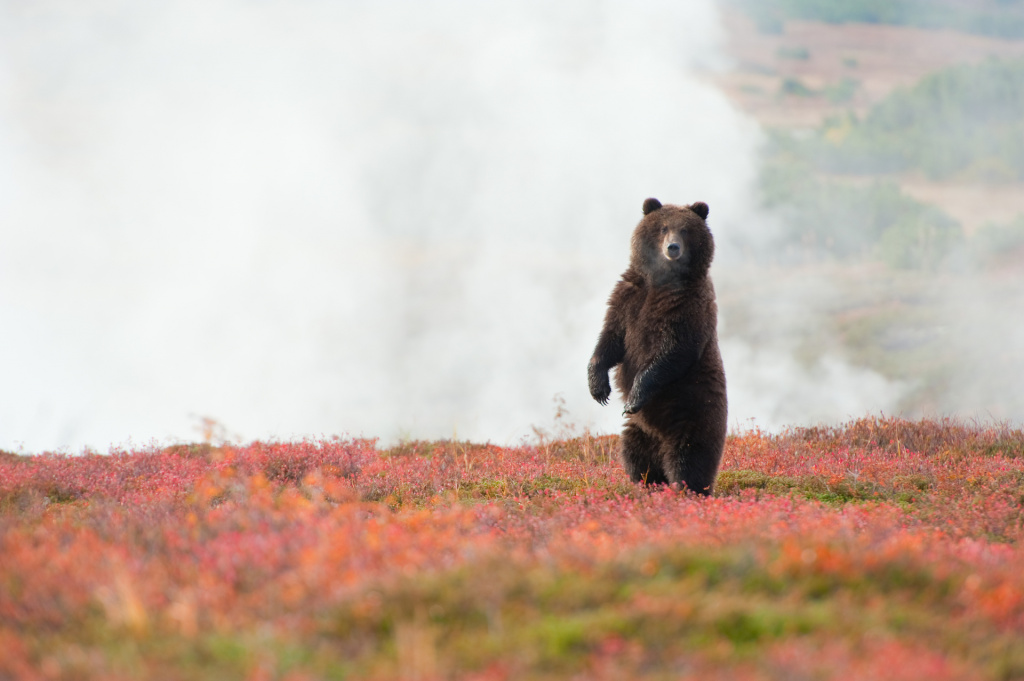 In the upper reaches of the Geysernaya River, at the foot of the Kikhpinych Volcano, there is a plot no more than 2 km in length and 100-500 m in width. This is Death Valley. The concentration of toxic gases, like hydrogen sulfide, carbon dioxide, carbon disulfide and others, is extremely high here.

It is a merciless natural killer: rising from the depths, toxic fumes kill animals, whose corpses remain well-preserved for a long time due to a special gas composition, thus attracting new victims. The fact that this place is very dangerous is evidenced by the fact that the bottom of the river, the stones, and banks are covered with a sulfurous film. A lot of deadly gas accumulates especially in cloudy, calm weather.

A similar natural phenomenon is observed in other volcanically active places, like Death Valley near Yellowstone National Park, USA, or the Cave of Dogs near Naples, Italy. However, the composition of the poisonous gas “cocktail” in Kamchatka's Death Valley is much more complex, and, therefore, more aggressive and dangerous than in ordinary “death valleys”.

You can only view the Death Valley in the Kronotsky Nature Reserve from an observation deck, located at a safe distance. In open aerated areas, the concentration of toxic gases is not dangerous. 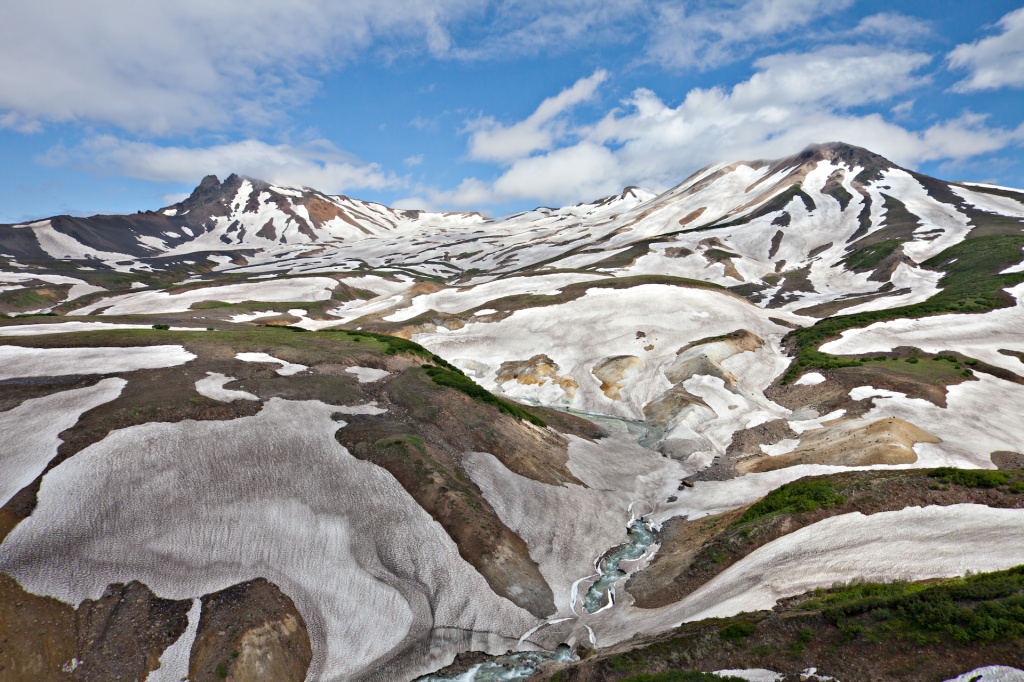 Lake Kronotskoye is one of the most beautiful places on the Reserve. This is the largest freshwater lake in Kamchatka by area (246 sq. km), and the third largest by maximum depth (136 m). It is triangular in shape, and freezes over from late December to mid-May.

The 11 islands towering over the lake 25-50 m above the water are named after the participants of the Kamchatka combined expedition of the Russian Imperial Geographical Society. Pacific gulls nest on these islands. Brown bears swim to the islands to feast on bird eggs. The symbol of the lake are swans, which arrive here before winter.

The lower slopes of the volcano are covered with forests, and the upper with glaciers and snowfields. Volcanic activity is manifested in the form of hot volcanic gas and steam exits. 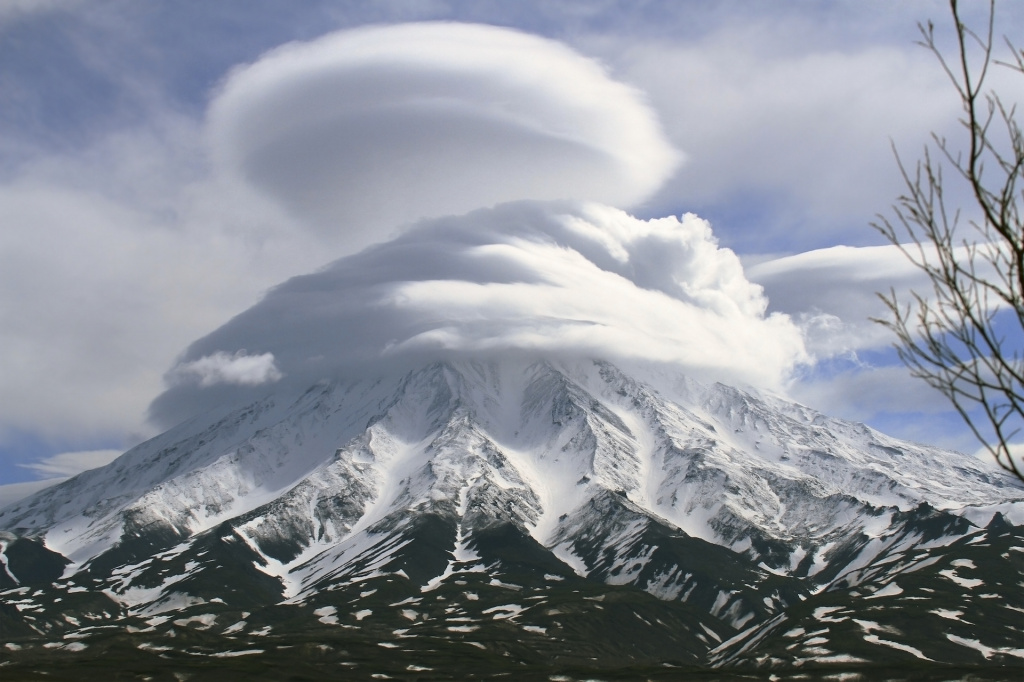 More accurately, this is a group of active volcanoes up to about 1,500 m above sea level. There are 7 volcanoes, of which the highest are Zubchatka, Zapadny Baraniy, Vostochny Baraniy, and Problematichny.

On the slopes of the Burlyashchiy and Tsentralny Semiachik volcanoes, formidable solfataric fields, composed of coloured rocks, are located. The most interesting of them is called Steaming Valley. Here everything hisses, gurgles, explodes with steam, water and trickles of dirt.

The most powerful steam jets are in the Verkhnee thermal field— you can hear their noise from several kilometres away. 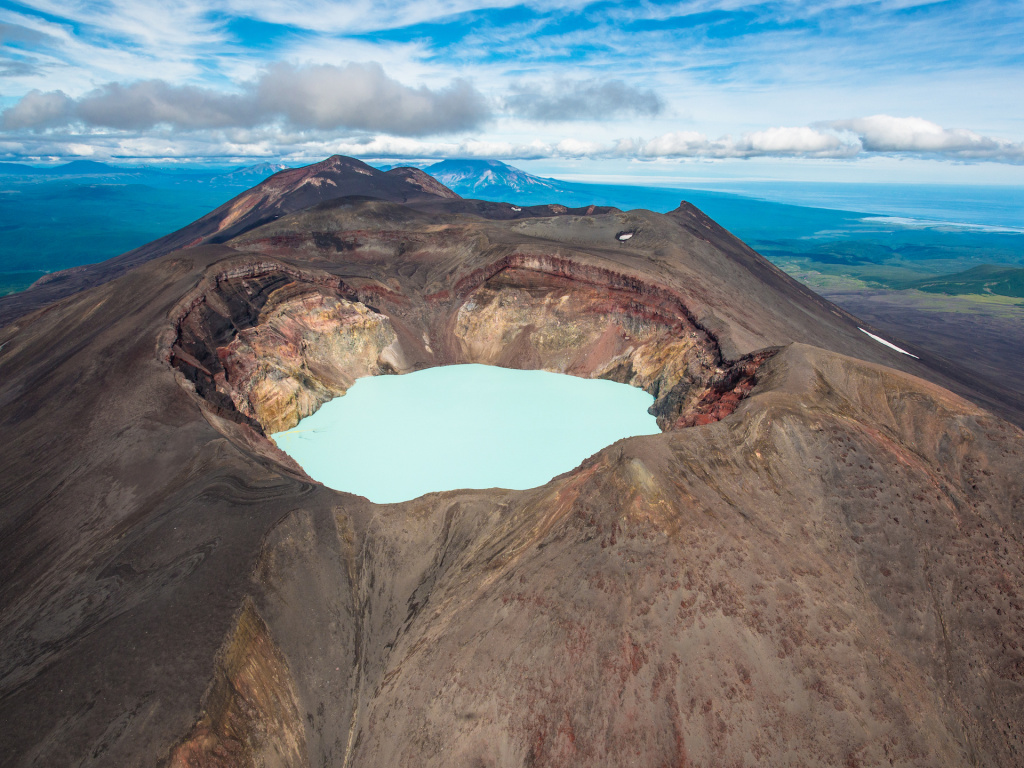 Tyushevsky is the largest glacier of the Reserve. It begins at an altitude of 1,200 m and descends to 600 m above sea level. It stretches 6 km from north to south. Other large glaciers include ¬Chazhminsky, Koryto, Pole Brovko, Pole Bunina, Alney, Augusta, Troya.

The fir grove is located near the Novyi Semyachik River. This is a mysterious coniferous island of taiga in Kamchatka, with over 30,000 trees growing on an area of 22 hectares.

The Itelmen—the indigenous people— knew of the grove for long time and tried to avoid it in every possible way: it inspired them with awe and fear. There are various theories regarding the origin of the forest. One of them is that these trees survived from the glaciation period, while another explains the grove as an artificial plantation of a ritual nature. The forest was revered as sanctuary: it was said that anyone who dares to chop it would die a bad death.

Whatever the “botanical mystery of the peninsula” may be, scientists agree on one thing: the name of the rare tree ('gracious fir' in Russian) is hardly consistent with reality. The Kamchatka fir is a short and thick-stemmed tree with a mass of dry branches.

How to Get to the Kronotsky Nature Reserve

There are more than 10 routes in the Kronotsky Nature Reserve. Local travel agencies arrange trips. You can get to the Valley of Geysers only by helicopter; no independent tourist access is possible. A trip there will be combined with a visit to the Uzon Caldera.

In May and June, there are restrictions on visiting these sites, as well as some other routes. This is done so as not to disturb the animals and birds during mating season.

If you want to get to the Kronotsky Nature Reserve independently, you will need to fill out an application on the website http://www.kronoki.ru/. To learn more about accommodations, visiting options as well as other information, please contact the Reserve's administration by email at zapoved@kronoki.ru, or call +7 (41531) 7-39-05, +7 (41531) 7-16-52.